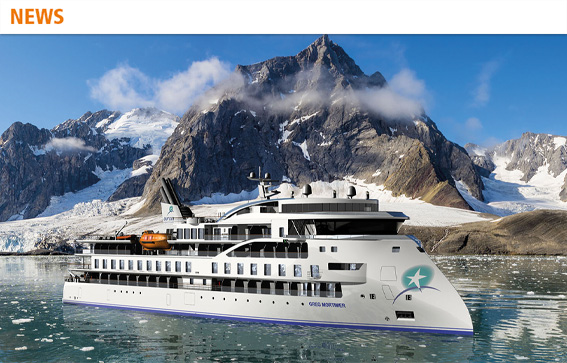 The Greg Mortimer, the first passenger vessel with X-Bow, hits the water in Shanghai

Aurora Expeditions are promoting an historic moment at ITB China this year, with the recent sea launch of a first- ever “X-Bow” ship in Shanghai.

On Tuesday 12 March 2019, Aurora Expeditions co-founder and Australian explorer and mountaineer, Greg Mortimer OAM attended the official sea launch of Aurora Expedition’s new state-of-the-art expedition ship, the Greg Mortimer here in Shanghai. The ceremony was attended by guests from SunStone Ships and Aurora Expeditions, including Managing Director Robert Halfpenny, who were present as the Greg Mortimer officially launched into its sea testing phase.
Aurora Expeditions Asia Pacific Sales Director, Dianna Schinella, based in Sydney, is at ITB China to promote the new ship. She explains that the company was founded over 27 years ago by Mortimer and his wife, as they wanted to take like-minded travellers to Antarctica “to educate them on the pristine environments and why it is important to protect those environments and the wildlife, but also to share the wonders of Antarctica and the polar regions in general with the world.”
The current owners took over in 2009, and since then, plans to launch the new ship have been under way.
“It’s the first of its kind in the world with the X-bow design, and construction has taken place just outside of Shanghai,” explains Schinella.
Capable of negotiating the strongest winds and waves, the Greg Mortimer is built to world-class polar standards – designed in close consultation with Aurora’s expedition specialists.
Accommodating 100 landing passengers in the polar regions, with an average of 120 per voyage, the Greg Mortimer is built to contend with adverse weather conditions, while its added creature comforts make for a more enjoyable journey out on the open ocean. The Greg Mortimer remains true to the company’s ethos and focus on multiple landings, flexible itineraries and family atmosphere – just with an improved home base. Construction of the new ship is progressing ahead of schedule and is now entering the final construction phase, with work commencing on the interior design.